Commsworld has begun transforming connectivity to rural areas throughout Northumberland as part of its partnership with broadband expert Alncom. 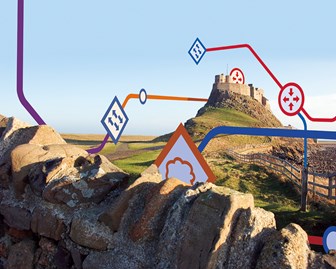 The Edinburgh-headquartered company has delivered significantly enhanced connectivity, bandwidth and resilience to Alnwick in record time, as well as the village communities of Longframlington, Longhorsley and Longhoughton.

The improvements mean that people now have access to ultrafast gigabit connectivity directly to their premises. The new services are the beginning of a complete overhaul of backhaul capacity to communities in harder-to-reach areas throughout the county. The high capacity that these areas now enjoy will also allow Alncom to continue to deliver gigabit-capable broadband to village halls for free in the county.

Steve Wood, Group Sales Director, says the company made significant progress in a short space of time, with one of the new connections being delivered in under two weeks. The enhanced speeds are a result of linking connections to Commsworld’s nationwide ultra-fast Optical Core Network.

He said: “We have delivered five optical connections in total, with one being put in place in just two weeks. As a result, we together with Alncom are fulfilling our pledge to connect remote communities, situated anywhere in Northumberland, to high capacity, resilient, and future-proofed pure fibre connectivity.

“These new connections are just the beginning of Commsworld and Alncom’s vision to help provide all the socially inclusive benefits that better broadband connections bring to schools, businesses, community organisations and resident groups in not only Northumberland but also to the most remote rural areas across the country.”

The partnership’s successful delivery marks the continuation of Alncom’s journey. It has not only delivered Fibre-to-the-Premises (FTTP) and Fixed Wireless Access (FWA) to areas without decent internet connections throughout Northumberland, but also provided free connectivity to 20 town and village halls in the county, so they can fulfil their 21st century role as community digital hubs.

It has also strengthened its position as a rural broadband leader after securing private investment from Railsite Telecom and funding from the UK’s Gigabit Broadband Voucher Scheme to revolutionise broadband across its service area.

Managing Director of Alncom, Stephen Pinchen, said: “This really has been a transformational relationship for both parties and an opportunity to use Alncom’s rural knowledge to deliver fibre broadband in record time to the most remote villages and communities.

“Utilising Commsworld’s resilient national infrastructure, we are able to deliver speeds of up to 10G now and with scalability of up to 100G, we are delivering the fastest fibre available, and also building capacity for the future.”

The partnership’s success marks an excellent start to Commsworld’s 2022. Last month the company, which has built a huge track record of success in radically modernising public sector networks, was awarded a contract which could see £150m spent over 15 years to transform North Lanarkshire Council’s digital infrastructure and connectivity.

The 15-year framework agreement for Digital Connectivity Services will ensure improved access to high-quality, reliable fibre connections, that will make a transformative difference to investment opportunities for businesses in the area as well as tackling digital exclusion among its citizens.

Last year it completed the build of its full-fibre internet connectivity to rural towns and villages in Renfrewshire in record time as part of infrastructure delivered through a £15m Connectivity as a Service framework contract signed with Renfrewshire Council.

Commsworld also made history by becoming the first network operator to be on every one of the UK’s eight internet exchanges when it joined NCL-IX, a new interconnection point for data transfer from the USA to Northern Europe in the North East of England, at Newcastle’s Stellium Datacentre.