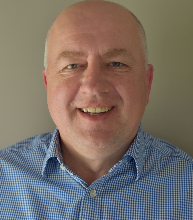 He joins the Board of Edinburgh-headquartered Commsworld from M247, where he was Chief Financial Officer of the company, based in Manchester.

The appointment represents a ‘homecoming’ for Andy, who hails from Kilmarnock, but has travelled the world in a career spanning more than three decades.

Andy spent 14 years in Semiconductors at Motorola, which subsequently became Freescale Semiconductors. During this period he was based in both Hong Kong, as Asia and Global Manufacturing Controller, and later in Texas as Division Financial Controller.

In 2007 Andy moved into the aerospace industry, where he worked for a decade. His first role was as Europe/International Finance Director for Spirit Aerosystems, with responsibility for its UK, France and Malaysia aircraft structures operations. He then became Group CFO at Bournemouth-based AIM Altitude, which designs and manufactures precision-made lightweight interiors for the aerospace industry.

For the last 12 years, Andy has operated in privately-owned businesses as a CFO and has been through several successful exits, carves outs and acquisition transactions in the process.

Andy said: “I am delighted to be joining Commsworld at a key point in the company’s growth trajectory, and am looking forward to working with everyone on the team to take Commsworld through the next stage of its development.”

Steve Langmead, Chief Executive of Commsworld, said: “I am delighted that Andy has joined the Board of Commsworld in what is proving to be another excellent year for the company, the highlight of which so far is the securing of a 15-year contract to transform North Lanarkshire Council’s digital infrastructure. His experience and expertise will help guide us to even greater success.”

Andy replaces Graeme St John, who has been Chief Financial Officer for more than 20 years. A key figure in the development and growth of Commsworld, he will be continuing in a new role as an advisor to the company.