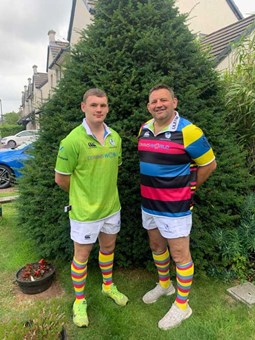 Crusaders Rugby wore the kit for the first time ever on Saturday (31st July) when they play in the Edinburgh City 7s’ elite category at Peffermill – more than two years after their previous kit was destroyed in a fire in a Stockbridge laundrette.

Following the freak blaze Commsworld, the UK’s leading independent network provider, stepped in and donated £2,000 to pay for a new set of 50 Canterbury tops, shorts and socks for the team, which raises money and awareness to fight male cancer.

The selfless gesture was made at the time by then Chief Executive Ricky Nicol, who himself has recovered following a battle with cancer. But the onset of COVID-19 led to the cancellation of Crusaders’ rugby fixtures.

Now, with the season set to resume this weekend at Peffermill, the players have finally got the chance to don the new kit, with Commsworld’s logo emblazoned across the front.

Duncan co-founded Crusaders Rugby with Mark Dainter in 2011. Both men successfully battled cancer, Duncan a tumour in his brain, while Mark had a tumour in his chest. Their mission with Crusaders is, through rugby, to make more men aware of cancer, its symptoms and to encourage early diagnosis.They also work with schools to educate boys about the importance of checking for testicular cancer.

Campbell was just eight when Duncan was diagnosed. He himself played for Crusaders – the club plays rugby at all levels and ages. He has gone on to have a successful rugby career, playing for Currie in Edinburgh – who dad Duncan also played for – Otorohanga in New Zealand, and now taking the field for Watsonians Super 6 team. He is also one of the Crusaders’ young ambassadors, and still turns out for the club to play in 7s events.

Mark, who formerly played for top English side Wasps, said: “It may be over two years ago that this fire happened, but we’re still so grateful to Commsworld for this kind gesture. Thanks to them we were able to continue our work raising funds which pay for things like prostate cancer checking events. But then COVID-19 happened, and we were unable to play due to lockdown. So Saturday will be a very sweet day for us, and a really great one for Commsworld too.”

Duncan said: “I am delighted with the new kit, and can’t thank Commsworld enough. Crusaders prides itself in not only providing entertainment through rugby, but also helping raise cancer awareness. This new kit means we can continue to wear our colours with pride on the rugby field and take the fight to cancer off it.”

Steve Langmead, Chief Executive of Commsworld, said: “Cancer is something that affects everyone. It’s also touched our Commsworld family, as the company’s founder Ricky Nicol has also battled throat cancer.

“So we were delighted to help Crusaders out with the sponsorship and proud to be playing a supportive role in the great work they do.”