Commsworld Invest in Next Generation of Edinburgh’s Rugby Stars

EDINBURGH’S premier rugby club has secured much-needed sponsorship which will enable it to develop both its flourishing academy and talented first team. 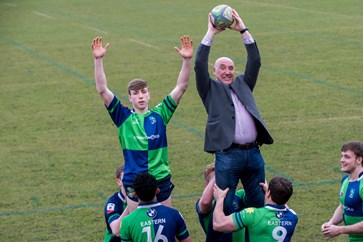 Boroughmuir Rugby Club has announced it’s to continue its fruitful partnership with Edinburgh-headquartered tech firm, Commsworld, as lead sponsor for the next five years.

The deal allows the team to continue its work in the local community to get youngsters involved in rugby, which has been helped by Commsworld’s sponsorship over the previous five years.

The club has over 350 young players in its youth academy, with its under 16 side recently winning the Scottish Cup.

It provides training to 1,000 youngsters each year and the deal will see Commsworld branding on all the team’s kit, from the youngest age group, through to the senior side.

Commsworld is committed to investing in the local community to help the next generation of talented youngsters from the capital flourish.

Andy Knight, Community Development Manager at Boroughmuir Rugby Club, said: “We are very keen on providing a clear pathway for our young players to progress into our First XV and the continued backing from Commsworld allows us to do this.

“We put a lot of emphasis on social responsibilities through the quality training we provide to our young players and the sponsorship means we’re able to carry this out across the local community and within schools.”

Boroughmuir play their homes games at Meggetland and the first-team currently compete in the Scottish Premiership.

Andy believes that having the tech company on the team’s kit can lead to an increased focus from younger players.

He added: “We’re proud to have such a reputable firm on our shirts and it can actually have an impact on the mentality of our younger squads.

“Having a shirt sponsor and that link to the first team can show them that they’re part of a really professional outfit and let them understand they’re important to what we’re trying to achieve as a club.

“They feel that increased sense of belonging and of course, the terrific support means that the quality of training can be very high while the costs to parents are kept to an absolute minimum.”

The backing from Commsworld also helps fund the match fees for referees and the purchase of training kit for younger age groups.

Ricky Nicol, Chief Executive at Commsworld, said: “We enjoy a terrific relationship with Boroughmuir and it was a no-brainer for us to continue our backing of the club.

“It’s brilliant to see the smile on the faces of the kids when they play and train and we can’t wait to hear about these youngsters making the first team eventually.

“We are delighted to support such a well-run club with a real sense of community and great focus on ensuring that young people love to pay and support rugby.”

Boroughmuir under-16s side has benefited from the sponsorship and recently won the national cup final.

A brilliant performance saw the team run out 80-12 winners against Cartha Queens Park at Murrayfield.