CityFibre, the UK’s leading pure fibre infrastructure provider, is on track to complete the installation of Edinburgh’s new 150km ultra-fast network by the end of September this year, transforming the Scottish capital into the UK’s largest Gigabit City. 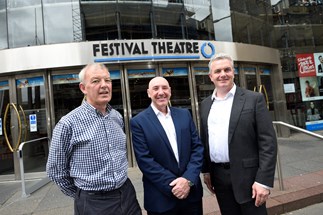 Construction has been delivered at spectacular speed, with CityFibre employing over 150 engineers and workers at the project’s peak. It has taken just 12 months to install over 100km (62 miles) of pure fibre infrastructure throughout the Scottish capital, taking the current total to 126km since launch.

Upon completion, the network will provide a future-proof alternative to the city’s capacity-constrained copper network, whilst offering connectivity at gigabit speeds (50-100 times faster than the UK average) to around 7000 businesses. It will also reach over 300 public sector sites including schools, libraries and office buildings.

James McClafferty, CityFibre’s Head of Regional Development in Scotland, said:“Reaching 100km is a significant milestone for the project, which has been a truly collaborative process, working with our partners, Commsworld.

“Spanning 150km, which stretched out would take you from Edinburgh to Aberdeen, the completed network will establish Edinburgh as the UK’s largest Gigabit City which is a real coup for its businesses and services.

James added: “Throughout the project, CityFibre has been delivering fibre connectivity to Edinburgh businesses and organisations in partnership with Commsworld, a leading Edinburgh-based telecommunications network service provider and the official launch partner of the Edinburgh Gigabit City project. It will continue to do so after September, when it will progress ambitious plans to extend Edinburgh’s gigabit network beyond 150km.”

CEO of Commsworld, Ricky Nicol, said: “Edinburgh is asserting itself as a leading digital city on a global scale - and to be a part of that is particularly exciting. CityFibre has delivered on its promises – and has given Edinburgh a highly enviable cutting edge network infrastructure, far exceeding the capabilities available prior to its work.

“It has to be said, the response from a broad spectrum of the business community has been incredible – they have embraced the project and understood its transformational potential right from the start.”

Amongst the most recent businesses to be connected to Edinburgh’s Gigabit City network is Edinburgh’s Festival Theatre. As a result, it is now able to offer ultrafast WiFi to guests and conference attendees.

Iain Ross, Director of Finance and HR at The Festival and King’s Theatres, said: “When faced with the failure of our original supplier to provide a dedicated fibre network to allow us to host a major conference at the Festival Theatre, we turned to Commsworld and CityFibre who have delivered impeccably across all areas.

“They ensured our public WiFi network was installed in time and as a result, we were able to provide an outstanding service to over 800 attendees, each using multiple devices. We have no doubt that the Edinburgh Gigabit City project will be of major benefit to Edinburgh and businesses operating in the city, and are delighted to have found such reliable and focused partners to provide exceptional public WiFi in our theatres.”

Aberdeen and Glasgow are also receiving major infrastructure investments that will see the digital capabilities of its connected customers dramatically accelerated as part of CityFibre’s mission to bring next generation connectivity to Scotland.