The UK’s largest gaming festival is set to come to Scotland for the first time – made possible by an ultra-fast business network providing the foundation for the vast demanding technology on show.

As a client of Edinburgh based Commsworld, the EICC recently joined the ultra-fast gigabit capable Edinburgh CORE network, developed by infrastructure builder, CityFibre, and launched last May.

In order to provide the ultimate conditions for the gamer event, the EICC’s connection will be temporarily supercharged, allowing for some of the fastest network speeds present anywhere in the UK - up to an unprecedented ten gigabit per second.

He said: “The EICC is an institution in our home city and we are extremely proud that they have enlisted our services as a local firm – with the connection made in time for this exciting event.

“This Insomnia Festival perfectly demonstrates the strength of the network in a manner that is especially visible and can be related to by the high percentage of the population that enjoy gaming from home and understand the importance of a fast, reliable connection. 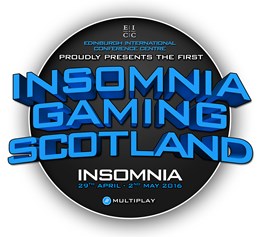 “In effect we have been able to temporarily ramp up the already substantial bandwidth, a practical option for the likes of EICC, who would have normally had to stretch to expensive annual contracts in order to have access of such ultra fast network speeds.

“High speeds are essential for online gaming – where you need as fast a response time as you can get. So in a room with thousands of gamers along with software writers demonstrating products, it becomes apparent that these incredible network speeds are a necessity”

Richard Lloyd, EICC’s Client ICT Manager, believes the ultra-fast connectivity in such a prestigious venue like the EICC will have a huge positive impact, as they can pass all of these benefits onto their own clients who like the Insomnia Gaming Event, may be running highly technical online operations during conferences and events.

Richard said: “Insomnia Gaming Scotland is a great example of an event which relies on ultra-fast connectivity to make it happen. Working with Commsworld we’ve been able to ensure that we have the infrastructure in place to make this event a success.”

Commsworld, which has now grown to 63 staff, is the official partner to the CityFibre Edinburgh CORE network, helping organisations in the capital achieve up to Gigabit speed connectivity through Pure Fibre infrastructure.