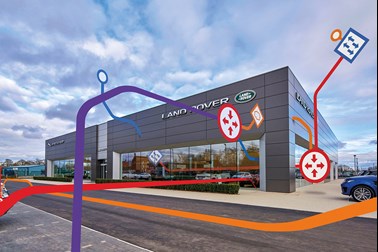 Park’s Motor Group have both been on an incredible journey since joining forces 22 years ago.

Together, they have grown into leading companies in their fields. Commsworld is the largest privately-owned optical core network provider in the UK while Park’s, based in Lanarkshire, has expanded into one of the nation’s largest privately owned motor dealership groups.

Back in 1999, when the internet was very much in its infancy and broadband for all was just a dream, Commsworld was a telecoms reseller which, in the five years since it was founded, had reached a turnover of £1m having rapidly grown its client base – with Park’s among them.

Ricky Nicol, Founder and Vice-Chairman of Commsworld, said: “At the time our work with Park’s was based around telephone systems. We were called in as their telecoms needed to satisfy their requirements, so we replaced their networks, and our relationship began.”

Graeme Park, Marketing Director at Park’s, said: “It’s fair to say the Commsworld of today is unrecognisable from the one we started dealing with in terms of scope, size and product offering and I think that mirrors the changes within our business too. We have grown in size, regional and product representation and Commsworld have been an important partner in terms of connectivity and helping that growth with seamless integration of newly developed sites and other businesses we have acquired over the years.”

This growth saw the need to not only expand Park’s phone network but also its technical infrastructure to meet the growth and provide a resilient, efficient, cost-effective system. It also led to a forging of personal relationships between Park’s and Commsworld that exist to this present day.

Ricky says: “There are members of our team who have been involved with Park’s from the very start. The years saw the development of a two-way trusted relationship, where Park’s gained real value from the advice given by Commsworld, as well as our ability to work fast to resolve any issues.

“At Commsworld, good customer service has always been very important to us, coupled with the fact that we are Scottish-based and take great pride in helping fellow thriving Scottish businesses like Park’s."

Ricky says the relationship also drove Commsworld to make a fundamental change to its business. He says: “We acted as an agent of other suppliers’ networks for Park’s. But the experience made us realise that it was time for us to build our own networks. From there we developed our own network, and now we provide an entire cloud technical infrastructure.”

This journey coincided with Park’s UK expansion, and the need to develop its infrastructure to cope with the increasing technological demands placed on 21st century motor dealerships. In 2016 it acquired Macrae and Dick, creating an enlarged group that added a further 12 dealerships and adding more locations including Stirling, Perth, Inverness, Elgin and Aberdeen where the group was not previously represented.

Graeme said: “Our relationship with Commsworld has completely evolved. In the early days it’s fair to say it was centred around the provision of telephony and fixed systems within each business.

“Beyond that, the increased use of connected systems and services meant the development of a network with Commsworld. Our first iteration was built in a traditional “hub and spoke” manner centred around our Head Office. With the increased technical options we have become far more resilient and the use of cloud infrastructure has allowed us to become more agile and build in far greater resiliency in how our network is structured and utilised.

This, in conjunction with VOIP telephony, of which we were an early adopter, allows us to standardise the set up at any business we open or acquire in a timely manner and Commsworld have been central to that strategy.

However, a strong relationship with the people we deal with at Commsworld helps to underpin all of the technology and is vital to our business.”

Although both businesses have undertaken a huge journey in the two decades of working together, the fundamental principles that have made it work remain the same – namely trust and value.

Ricky says: “We have built on our relationship with Park’s mainly through our fantastic team. They have delivered year after year of success, and they remain central to Commsworld’s vision of continuing to provide excellent value for existing customers while expanding our business into new fields.

“With them, we look forward to maintaining and developing our trusted relationship with Park’s for a further two decades and beyond.”